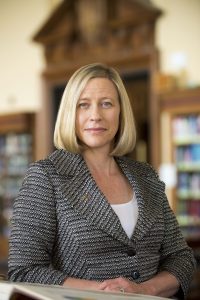 Maurie McInnis began her appointment as executive vice president and provost of The University of Texas at Austin on July 1, 2016. Previously, she served as vice provost for academic affairs and professor of art history at the University of Virginia (UVA).

Service at University of Virginia

At UVA, McInnis served as Vice Provost for Academic Affairs where she played a central role in increasing collaborations across colleges including the creation of several interdisciplinary degree programs. In addition, she worked to create new programs that increased undergraduate research opportunities.

In her previous role as Associate Dean for Undergraduate Academic Programs in the College of Arts and Sciences, she led a number of curricular reform efforts and worked to strengthen undergraduate advising.

McInnis is a renowned scholar in the cultural history of American art in the colonial and antebellum south. Her scholarship focuses on the relationship between politics and art in early America. She has published extensively on American art history, including four books that earned six awards.

Her most recent book, Slaves Waiting for Sale: Abolitionist Art and the American Slave Trade, was awarded the Charles C. Eldredge Book Prize from the Smithsonian American Art Museum as well as the Library of Virginia Literary Award for nonfiction.

McInnis is married to her husband, Dean. Together they have two children, and much of her free time is focused on her family. She enjoys photography, traveling, being active and hiking, or ideally combining all of the above.